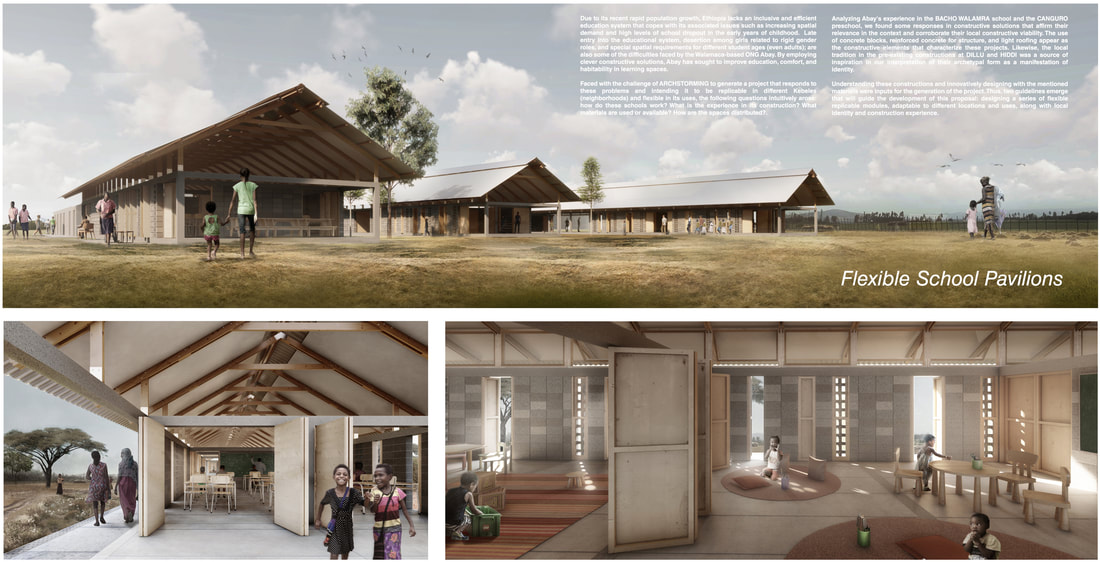 Due to its recent rapid population growth, Ethiopia lacks an inclusive and efficient education system that copes with its associated issues such as increasing spatial demand and high levels of school dropout in the early years of childhood. Late entry into the educational system, desertion among girls related to rigid gender roles, and special spatial requirements for different student ages (even adults); are also some of the difficulties faced by the Walamaca-based ONG Abay. By employing clever constructive solutions, Abay has sought to improve education, comfort, and habitability in learning spaces.
Faced with the challenge of ARCHSTORMING to generate a project that responds to these problems and intending it to be replicable in different Kebeles (neighborhoods) and flexible in its uses, the following questions intuitively arose: how do these schools work? What is the experience in its construction? What materials are used or available? How are the spaces distributed?.
Analyzing Abay's experience in the BACHO WALAMRA school and the CANGURO preschool, we found some responses in constructive solutions that affirm their relevance in the context and corroborate their local constructive viability. The use of concrete blocks, reinforced concrete for structure, and light roofing appear as the constructive elements that characterize these projects. Likewise, the local tradition in the pre-existing constructions at DILLU and HIDDI was a source of inspiration in our interpretation of their archetypal form as a manifestation of identity.
Understanding these constructions and innovatively designing with the mentioned materials were inputs for the generation of the project. Thus, two guidelines emerge that will guide the development of this proposal: designing a series of flexible replicable modules, adaptable to different locations and uses, along with local identity and construction experience. 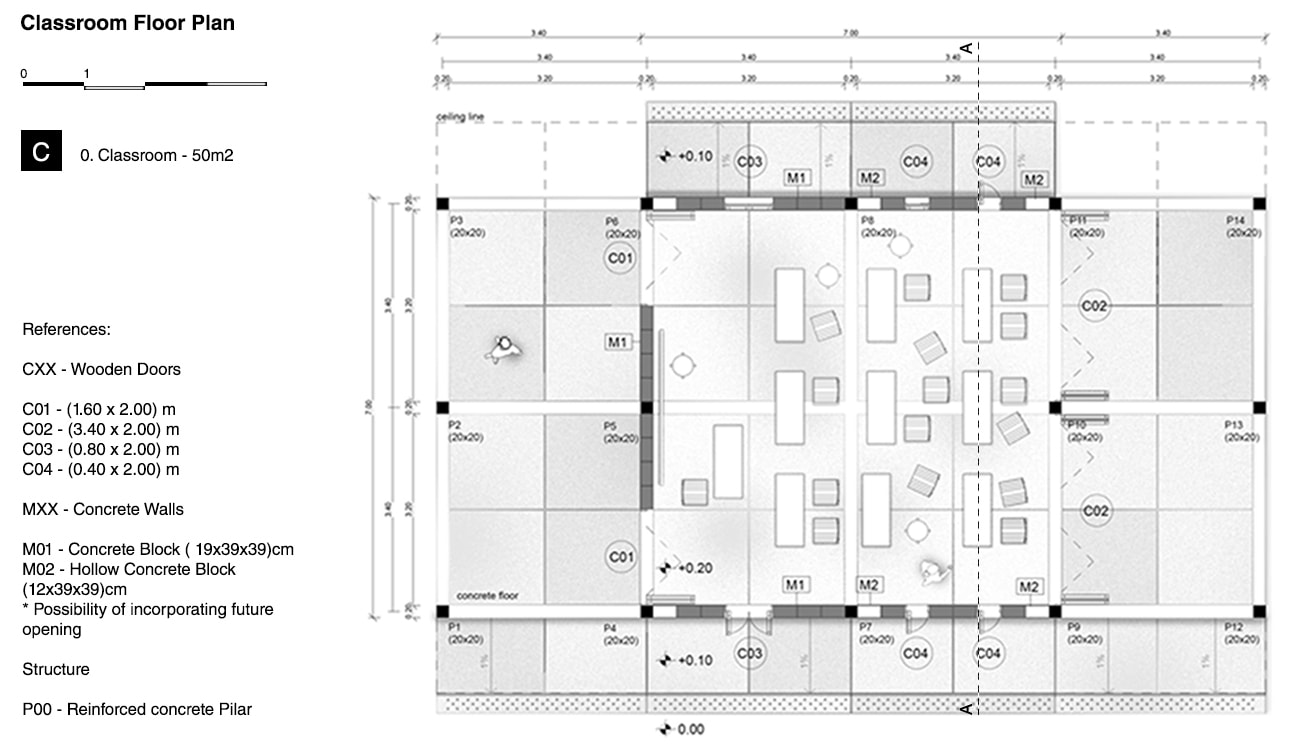 Local identity and accumulated construction experience.
The value of a practically vernacular construction tradition stands out in the existing buildings mentioned, which materializes the elementary space for educational activities. At the same time, longitudinally shaped as linear pavilions, the buildings seem to dialogue with the surroundings generating a special bond between architecture and landscape.

To develop a sustainable project, both culturally and environmentally, we take these schools as a starting point, a basic scheme, or project outline. By studying and interpreting their elementary forms, we seek to enhance local identity, the sense of belonging, and the constructive viability of the new design. 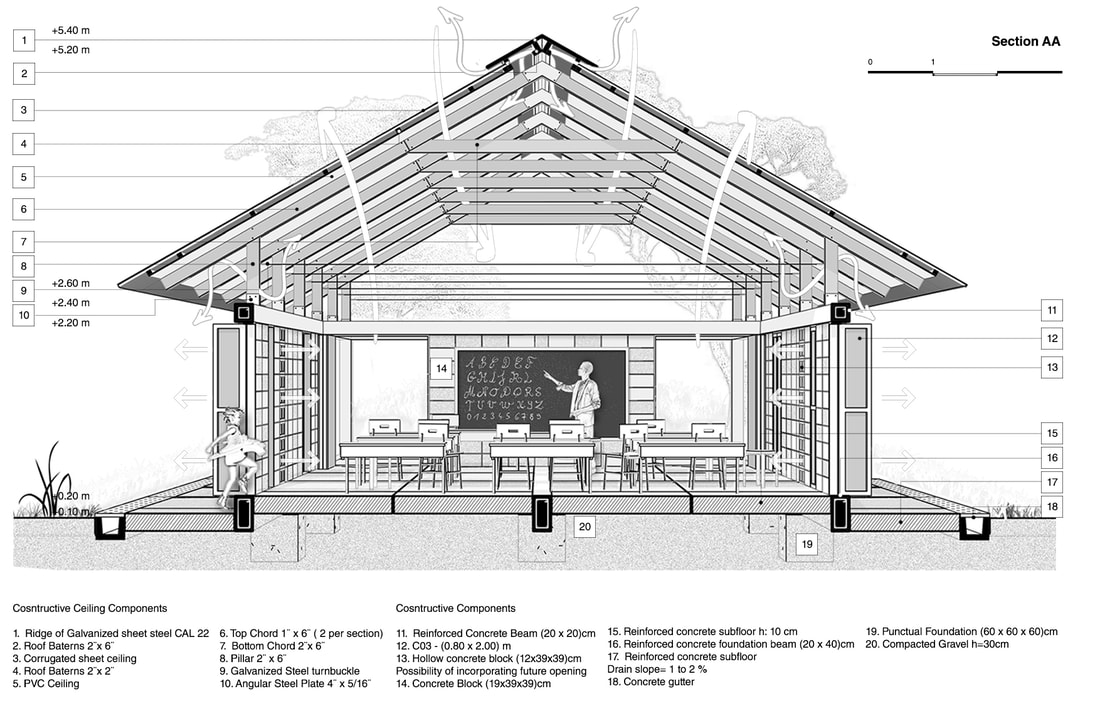 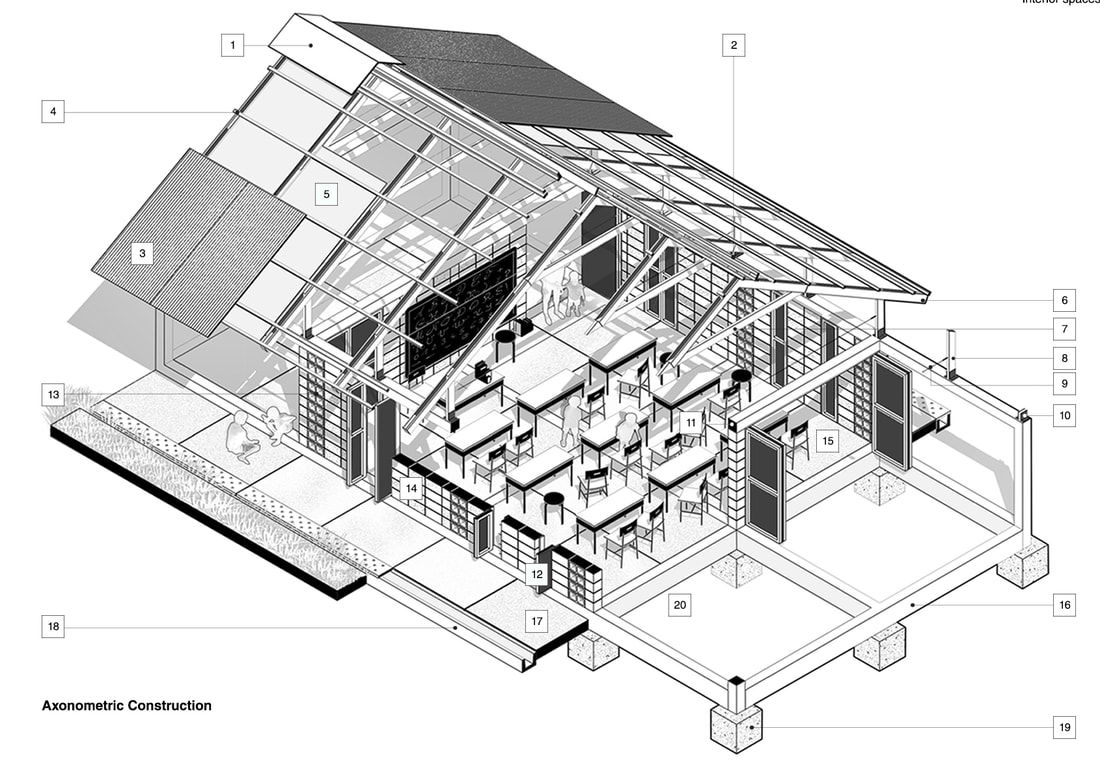 Programmatic modules
A kit of programmatic modules is presented to be used flexibly by Abay NGO. The specific objectives of this kit are achieving: greater flexibility in space usage to accommodate changing requirements, diversity in cluster generation that can allow adaptability to different enclaves, and growth potential to keep improving programmatic response.
As an improved version of the existing linear pavilion, the different programmatic modules are arranged longitudinally. Adding to the educational space new entrances, roofed spaces with open perimeter, and exterior and interior circulation paths, the new grouping functions as a system with better spatial quality and dynamic of uses.

Organization scheme
The organization schemes contemplated for both locations recognize patterns in their existing building arrangements, the parallel pavilions type, and the cloister type. Following those guidelines, the proposed setting designs establish the position of the new constructions to help define contained yards that will hold sports activities, expansions of classroom interior spaces, and vegetable gardens.

HIDDI - Parallel pavilions.
The main pavilion conformation is defined in the first stage of the project development. Thus, new pavilions parallel to it can be added in later stages, establishing dialogues with the existing buildings. 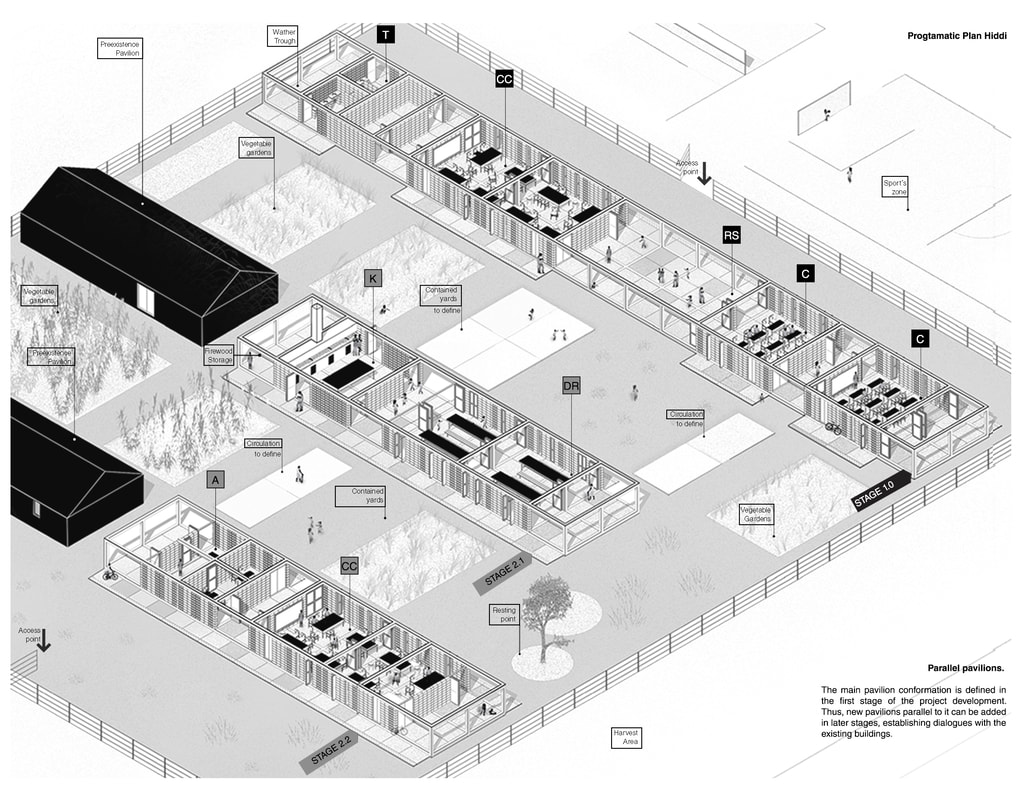 DILLU - Cloister
The new buildings, positioned between the existing school and the teacher's house, generate in the first stage an organized strip of pavilions optimizing how the entire complex works. The dining and kitchen pavilion, located in the central area, joins both schools by allowing shared use, as well as helping define two different courtyards.
Due to its flexible characteristics, the proposal allows adaptation and growth, leaving open the possibility of starting stage one in the area suggested originally by Abay. 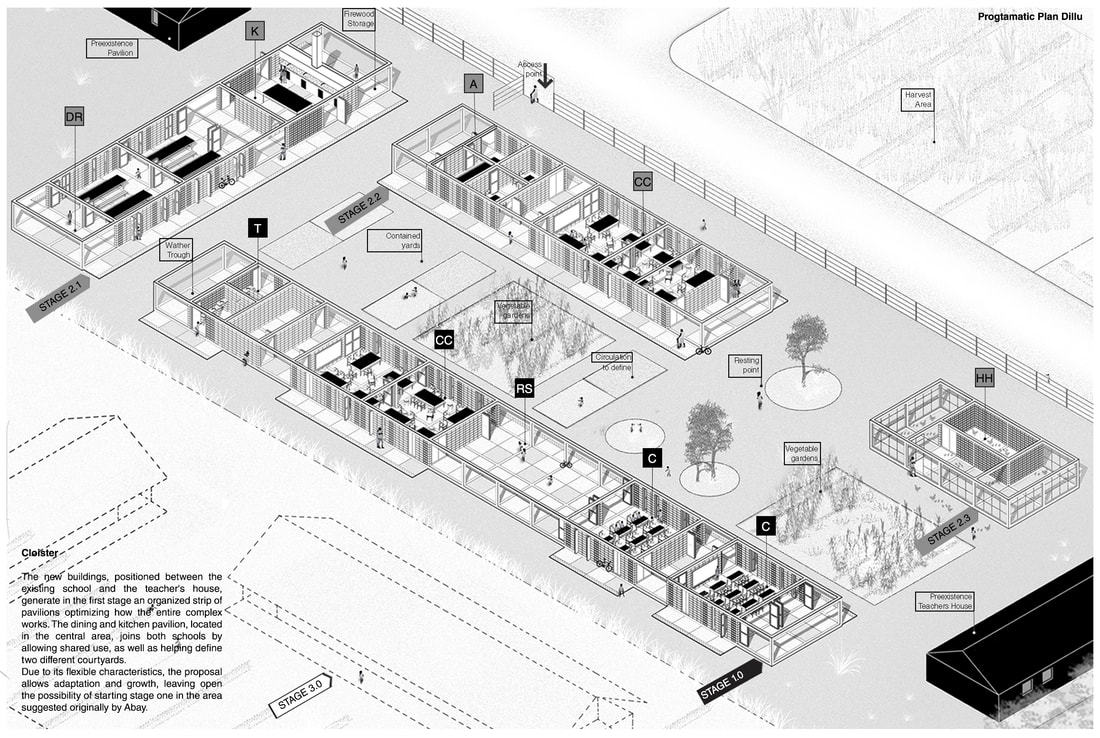